Sir Geoffrey Clifton-Brown speaking in a debate on the Agriculture Bill and calls on the Government to ensure that British farmers are not undercut by imports from countries with lower welfare standards, can continue to export to the EU without adverse tariffs and ensure lump sum payment provision are geared to encourage young people into farming. 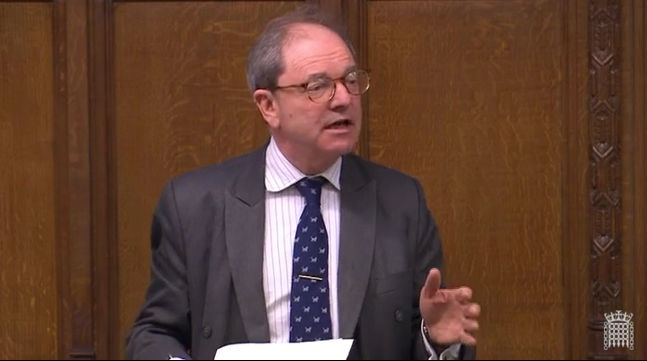 This is the first chance I have had, Mr Deputy Speaker, to pay tribute to you for being back in your rightful place in this House.​

I also pay tribute to the six excellent maiden speeches from my hon. Friends the Members for Ynys Môn (Virginia Crosbie), for Rushcliffe (Ruth Edwards), for Buckingham (Greg Smith), for North Devon (Selaine Saxby), for South Cambridgeshire (Anthony Browne), and for West Dorset (Chris Loder). They are a highly talented group of men and women in whom I think our party will have an asset for many years to come. They are fantastic advocates for their constituencies, and they will all no doubt have long and industrious—illustrious, rather—political careers.

I declare my entry in the Register of Members’ Financial Interests, in that I am a farmer and receive income from farming.

As my hon. Friend the Member for Buckingham reminded us, this is the first debate that we have had since we left the European Union—and we have well and truly left the common agricultural policy, so we now have the opportunity to design a new domestic agricultural policy that will recognise the unique characteristics and needs of the UK farming industry as opposed to 27 European countries.

The Government, in the shape of my right hon. Friend the Member for Haltemprice and Howden (Mr Davis), originally said that they would negotiate

However, more recently, my right hon. Friend the Chancellor said in the Financial Times of 17 January that farms have had three years to prepare for a new trading relationship. But to prepare for what—a free trade agreement with full benefits or a no-deal situation where beef and sheep exports face 50% to 60% adverse tariffs? The future of agriculture is very uncertain at the moment. However, as my right hon. Friend the Secretary of State said in her excellent speech, this landmark legislation could not only boost productivity but give some of the highest environmental protection in the world, setting an example to others.

This is an industry that employs 474,000 people, with a net annual contribution to the UK economy of some £8 billion. Last summer, the National Audit Office produced a report with some frontline statistics, which it is very good at doing, saying that there were 85,000 recipients of CAP payments in England in 2017. It went on to say that of those, 82,500 would participate in the new environmental land management scheme by 2028. That seems a very high and optimistic target, I say to my hon. Friend the Minister, and it will be achieved only if the scheme has properly defined objectives, is relatively simple to apply for and operate, and, above all, has an absolute commitment from the Government to pay on time for the work done, in line with their commitment to other small businesses. As I said, this is a highly ​ambitious target. I remind the Government that only 20,000 farms, as opposed to 82,500, had enrolled in the countryside stewardship scheme after 42 years of operation.

The NAO report goes on to tell us that without direct payment, 42% of farms would have made a loss, assuming that everything else had remained the same. The Government are committed to making payments at the same level this year, thereafter moving to a system of public goods for public money. However, having tabled amendments to the previous Bill, which fell due to the general election, to ensure that food production is at the heart of this legislation, I find it somewhat disappointing to see that public goods do not secure more of our food supply. For farmers, it will be difficult to compete in the same market as those who either have a one-sided subsidy such as the CAP or regulations that discriminate against our farmers. I understand that this year, 95,000 tonnes of rapeseed was imported into this country from Ukraine—a country that is allowed to use neonicotinoids, which are banned in this country. So we are simply exporting environmental risk to other countries by doing this.

Does my hon. Friend agree that it is perfectly legitimate to defend our producers against anti-competitive distortions being introduced into our market?

My hon. Friend makes an excellent point. That is precisely what I am trying to get at—our farmers can compete with any farmers in the world, provided they have a level playing field.

It is not only regulation that could be an obstacle to them. There could be a tariff schedule that broadly supports European farmers and disadvantages British farmers. For example, lamb producers in the Cotswolds, who work in a very important farming sector, could be undercut by New Zealand lamb being brought into this country with zero tariffs, while they face an adverse European tariff that prevents them from continuing their lucrative export to Europe.

The new ELMS and productivity scheme needs to be implemented on time, to see how it works in practice and to play an important role in achieving net zero goals. If it is not introduced on time in 2024, there will be a gap in funding. Many experts believe that introducing it on time will be extremely difficult, and that it is more likely to slip from 2024 to 2028, which will produce a gap in funding. We have an opportunity, post Brexit, to create a progressive, carbon-neutral model of farming in the UK, with the NFU committed to an ambitious target of the sector being carbon-neutral by 2040.

The Bill prepares our farming industry for the future, so that it can meet the needs of this country, and with that comes consideration of the younger generation of farmers. The lump sum payment provisions should be more geared towards encouraging young people into farming. As they stand, the provisions could well lead to some areas of the country simply not being farmed, because there will be land without the ability to get any subsidy whatsoever.

Farming has experienced a huge technological transformation in the past 10 years, with better IT, better animal husbandry, better use of GPS, improved agricultural chemicals and soil sampling, and a host of other technological improvements. Those advances in the agricultural industry will no doubt continue at pace. ​Younger generations can quickly adapt to new technology, as I am finding with my son, who has just moved to my farm. We must support them, so that they can play a bigger part in British agricultural production, considerably increasing productivity and environmental and animal welfare standards.