Sir Geoffrey Clifton-Brown MP has unveiled the new NHS inspired road name at a development on the site of the former Moreton-in-Marsh hospital.

Nightingale Gardens at the 16-home Moreton Edge development being completed by Midlands-based Deeley Homes on the edge of the town. 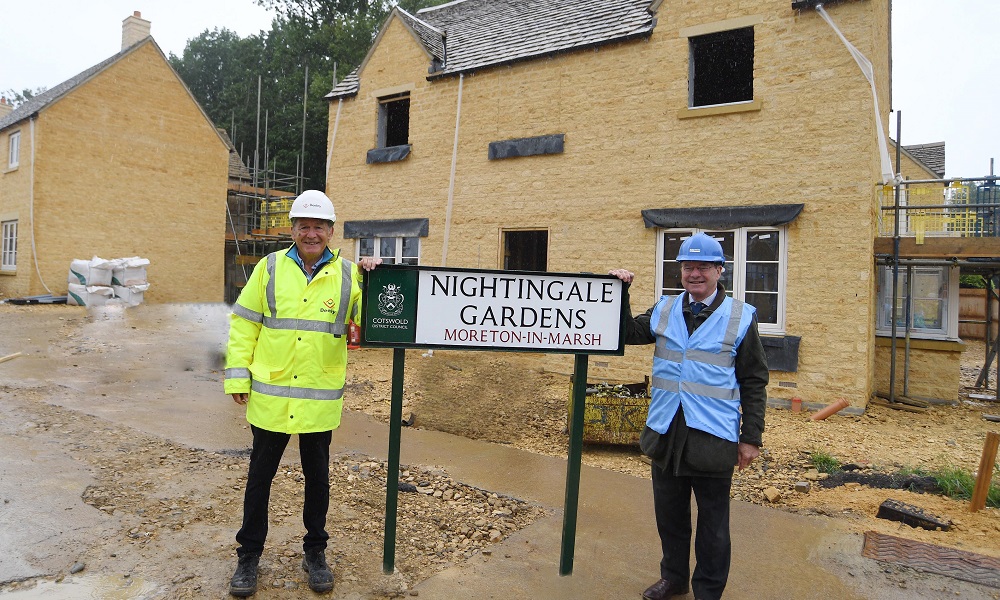 The Cotswolds MP returned to the development which he last visited in December 2020 to learn about its success and reveal the new road name.

Moreton Edge has seen more than 80 per cent of its plots reserved off plan and the first home will be completed in autumn.

The ‘Nightingale Gardens’ name pays homage to the tireless efforts of staff in the NHS and healthcare professions over the course of the pandemic.

It also recognises the history of the brownfield site and the former hospital which stood there.

Each of the 16 homes at Moreton Edge are also named after significant local people and locations – ranging from benefactors of the Moreton Hospital and renowned poets, to hidden treasures of the Cotswolds such as Kiftsgate Court Gardens.

Sir Geoffrey, who had a career in the property industry before his 30-year political career, said: “The development has come on leaps and bounds since I last visited and it is fantastic to hear of the success it has seen at such an early stage.

“It is very fitting that Deeley Homes has named the road as a way of thanking the NHS for the incredible work it has done for all of us during the pandemic.

“The development will be a great addition to the community here in Moreton-in-Marsh and I look forward to continuing to follow its progress as the first homes are completed later this year.”

Deeley Homes is part of Midlands-based Deeley Group which previously built the Co-Op on Moreton-in-Marsh High Street in the 1980s.

Moreton Edge features three two-bedroom cottages at the front of the development, ranging through to a three-storey, five-bedroom house at the rear of the site overlooking open countryside.

“Sir Geoffrey has been a great supporter of our Moreton Edge development and we would like to thank him for officially unveiling the Nightingale Gardens road name.

“We wanted to recognise the vital role the NHS has played in supporting the country throughout the last 16 months while also giving the road name a historic link to the former Moreton-in-Marsh hospital.

“These homes will be a great asset for the local community and the early demand we have seen has proved there is a desire for high-quality, stylish homes in the area.”