Sir Geoffrey is campaigning to improve river quality and is seeking to unite local groups and communities in the fight against pollution in the Cotswolds rivers and to apply pressure to Defra, the Environment Agency, Ofwat and the water industry to take urgent action to protect our rivers.

Everyone involved including DEFRA, the Environment Agency, and Thames Water, must put in far greater effort to restore limestone rivers.

They met on the River Coln at the iconic Bibury village where trout swim in one of the many inland waterways now under threat from the increasingly well-known scourge of sewage pollution. They were all shocked to find dead fish at the site and that they appeared to have fallen victim to pollution rather than other causes. 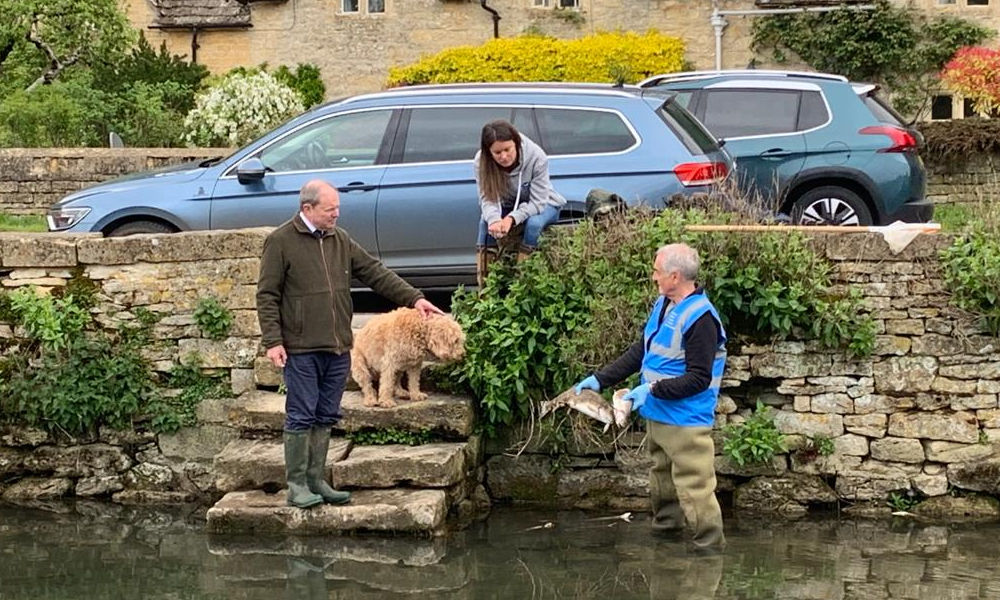 “We visited Bibury to assess the generalised health and level of pollution in the river. Expecting to find some rubbish and signs of sewage, we were shocked to find six dead fish all found in one spot. We also found sediment, brown algae smothering the weed and riverbed and turning over stones no sign of invertebrates, a bad sign for the biodiversity and health of the river.

“This demonstrated in one of our major tourist areas, what an important issue pollution in rivers is. Everyone involved including DEFRA, the Environment Agency, and Thames Water, must put in far greater effort to restore limestone rivers. Otherwise, the next generation will not inherit pristine, clear, rivers full of wildlife as they will have been destroyed”. 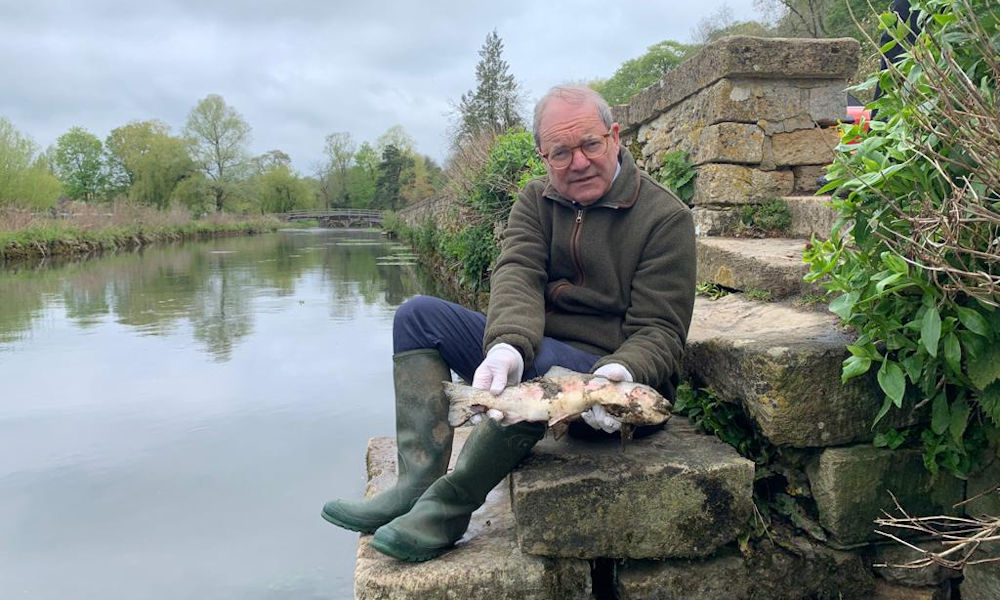 Sir Geoffrey has been campaigning for many years on the issues of flooding and river pollution. Having seen the recent Panorama documentary - The River Pollution Scandal, he is continuing to build on what WASP has achieved on the River Windrush where Thames Water have agreed to embark on an urgent cleanup project involving local communities. That is why he has brought in expertise from successful campaigning groups like WASP and Surfers Against Sewage with an understanding of the causes and effects of a growing problem that many people thought had been solved long ago.

“We are delighted to see Sir Geoffrey bringing a Cotswold wide approach to what is undoubtedly a chronic pollution emergency that will become a catastrophe if it carries on unchecked.

“WASP has already persuaded Thames Water to engage in a special recovery project on the River Windrush and we hope we can help Sir Geoffrey to stop extensive water industry pollution which has even been shown to be illegal in many cases. Our regulators have completely failed to control the water industry and have made pollution profitable.

“We have worked with Surfers Against Sewage before and they are a great organisation which is now extending its scope inland from the coast. With the new Chair of the Cotswolds Rivers Trust as well, we look forward to seeing what Sir Geoffrey can achieve with three solid groups to back him up.”

Whilst we could not be much further from the coast, Surfers Against Sewage has played a key role in cleaning up our beaches since the 1990s and Debbie Campbell is the Cotswolds representative for the group. She has seen the effects of sewage pollution first-hand at sea and locally and is determined to take urgent action to stop it.

“As a lifelong surfer and wild swimmer I was shocked when I moved to the Cotswolds. I love wild  swimming for my health,  diving into fresh cold water  to find I was actually swimming in polluted waters. I have 2 children aged 7 and 6 who love to have fun in the River Dunt, but it was no fun recently when the stream smelt of sewage ... this prompted me to contact my local MP Sir Geoffrey Clifton-Brown , who was very supportive , and since I have become a river activist I have been appalled by the lack of fish and stories from trout fishers who wade through polluted water  and cannot find any fish to catch and release. I will now make it my mission to report on Cotswolds rivers and make them safe for swimmers, kids, wildlife and the future.”

“We saw over 400,000 sewage discharges into water ways across the UK last year equating to 3.1 mission hours in 2020, putting surfer, swimmers, paddle boarders and kayakers at risk of contracting harmful diseases and viruses. And with only 14% of rivers in England meeting good ecological status, this continued pollution of the pressures blue arteries of the country is destroying the environment. This is simply unacceptable and its time we see real action taken by both water companies and government to stop sewage pollution so we can enjoy seas and rivers such as the Coln and see nature recover. With the collective action of national organisations like SAS and The Rivers Trust, local groups such as WASP, and politicians such as Sir Geoffrey we can end sewage pollution.”

The Cotswolds Rivers Trust which has led on much valuable habitat improvement work in the Cotswolds has just appointed a new Chair, Dr Richard Knowles, taking over this week.

“The Trust recognizes that tackling habitat issues alone is not enough to protect and restore biodiversity in the Cotswold rivers.  Sewage pollution has become the principal issue and until this is tackled the tragic decline of these rivers will continue.”

The fish kill was reported to the Environment Agency which has also received a report 2 days previously but had not attended. 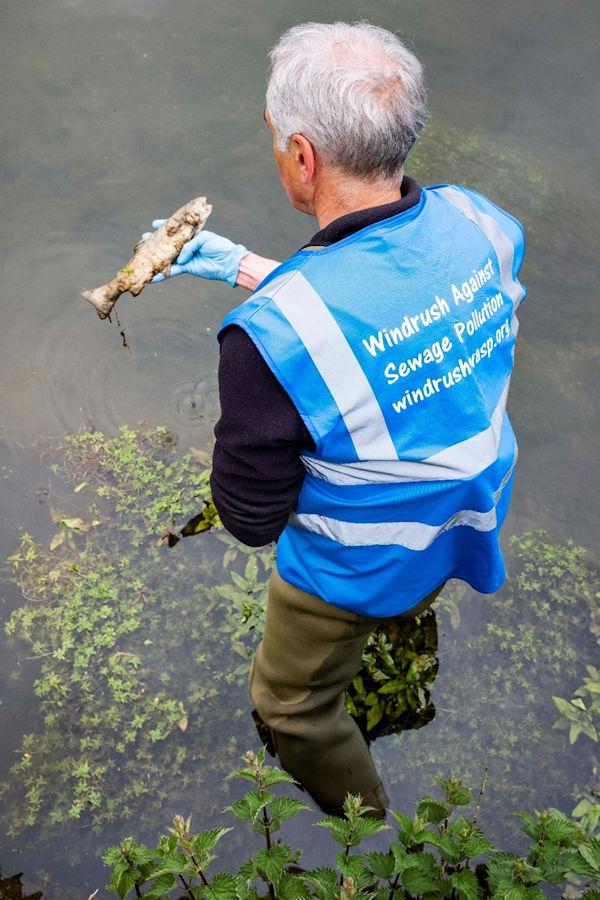 Ash Smith from Windrush Against Sewage Pollution – one of the local groups that have formed to fill a void in river protection examining a dead trout believed killed by pollution.